Santorini is gifted with a unique natural beauty and a wild scenery created by the volcanic eruptions. As it is extremely famous for the beautiful caldera, the island is also known for the two small islands of black lava positioned at the center of the basin of Santorini, which are, geographically, the youngest islets in the Eastern Mediterranean. Nea Kameni especially is a pole of attraction for tourists for its healing hot springs. The yellow waters there contain a large amount of sulfur and are characterized for their therapeutic purposes. Today, Agios Nikolaos which is the small cove in Nea Kameni islet is a true health source. Santorini villages perched on high cliffs offer a breathtaking view to the caldera and the young islets, especially during the amazingly colored sunset. Tourists can visit the volcano by taking one of the daily cruises advertised in any village. One can walk upon the solid black lava sides of the steaming volcano and explore the whole area, which is quite impressive. Nea Kameni is the central one, and once on its shore, after a walk of 20 minutes in the lunar scenery, visitors will discover the volcano's crater and other openings bursting with sulfur steam. The area also offers an incredible view of the beautiful villages hanging on the cliffs. The oldest volcano, Palea Kameni also has hot springs. 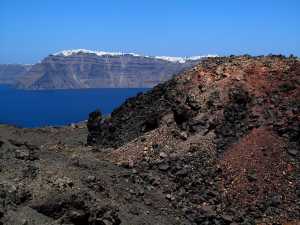 The volcanic complex of Santorini is the most active part of the South Aegean Volcanic Arc, which includes the volcanoes of Methana, Milos, Santorini and Nisyros. It marks the subduction of the African tectonic plate underneath the Aegean subplate of the Eurasian tectonic plate, at a rate of up to 5 cm per year in a northeasterly direction. It is characterized by earthquakes at depths of 150–170 km.

Non-volcanic rocks are exposed on Santorini at the Profitis Ilias Mountain, Mesa Vouno, the Gavrillos ridge, Pirgos, Monolithos and the inner side of the caldera wall between Cape Plaka and Athinios.

The Kameni islands at the center of the caldera are made of lava rocks. 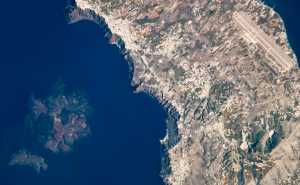 Palea Kameni and Nea Kameni were formed as a result of multiple, initially submarine eruptions at the center of the caldera.

Although dormant, Santorini is an active volcano. Numerous minor and medium-sized, mainly effusive eruptions have built the dark-colored lava shields of Nea and Palea Kameni inside the caldera.

Their last eruption was in 1950, and now only fumarolic activity, primarily inside the recently active craters, takes place. GPS instruments have registered renewed deformation around the caldera in 2011 and 2012.

The huge Minoan eruption of Santorini in the 17th century BC may have inspired the legend of Atlantis. It was rated 7, the highest score for a historical eruption, in the Smithsonian Global Volcanism Program's Volcanic Explosivity Index.